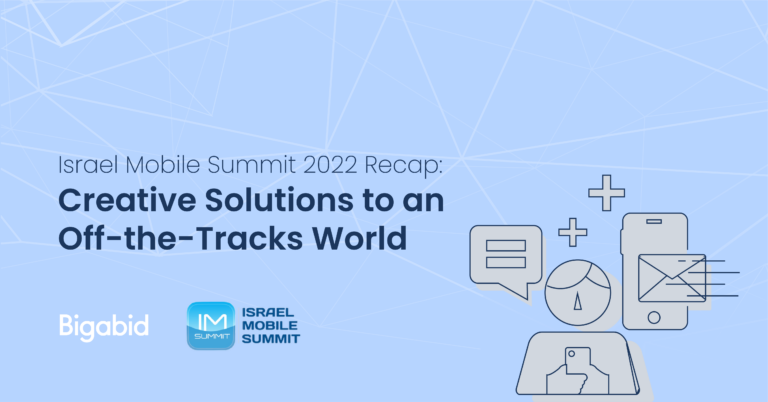 Israel Mobile Summit is the ultimate event for everyone in the apps/games/adtech ecosystem. Whether you’re a publisher, developer, app marketer, startup, or VC, the summit features sessions on how to grow and monetize your apps using advertising and in-app purchases, how to analyze your data, as well as how to acquire and maintain more users.

After two years of virtual events, the Israeli Mobile Summit 2022 got back to an in-person event. The Summit featured quality content on the mobile/games/adtech space, which included insightful panels on the latest topics. One of those panels featured talented executives and managers from Huuuge Games, AppsFlyer, Replai, Bigabid, and Trackier on the topic of “Creative Solutions to an Off-the-Track World”.

You can watch a video of the panel here.

Tomer Weisman, Head of User Acquisition for Huuuge led the discussion with the questions we outlined below.

What are the most significant challenges for advertisers, distributors, MMPs in this new era of privacy?

AppsFlyer’s representative and Product Manager, Yael Altshul, noted that attribution and measurement for both advertisers and ad networks are still going well, with only minor limitations. However, Targeting and Retargeting have become much more difficult as they were severely hurt by iOS 14. She noted that the option to learn about users that are not in their network was basically impossible, and the option to learn about a user attributed was also very difficult.

Yotam Galon, Director of Growth at Bigabid, noted that Retargeting, normally very profitable, was the biggest challenge. He credited AppsyFlyer as having a helpful solution. He emphasized that Apple’s vagueness was the biggest challenge; their stalling and lack of consistent information that was only delivered in pieces made it more difficult than it had to be. On the brighter side, he shared that creative solutions for both Targeting and Retargeting have been coming along very well for Bigabid and its clients.

Udit Verma, CMO and Co-Founder of Trackier, explained that it has been challenging to mine your own data and track user data for a given campaign. He added that now Apple is coming up with a mail protection policy, where you can’t even track open rates. He estimated that 50% of his data would not be relative, so he must focus on the other 50%.

Isabel Ferreira, Director EMEA at Replai, mentioned that there is light at the end of the tunnel. She noted that advertisers must utilize the upper funnel with lots of emphasis on creative. Since platforms like Facebook and Google are becoming more automated, advertisers must test more creatives. The main problem is that no one really knows what works at scale. She argued that the solution is using computer vision AI to empower advertisers to use better creatives at scale.

Concerning WWDCs latest announcements are the panel members pleased with the amount of data?

Yael from AppsFlyer said that SKAdNetwork 4.0 isn’t necessarily a game changer but an incremental evolution of Apple’s ongoing solutions, that now we will have more capabilities, longer LTV window, more campaign breakdowns, and more prospects, be we will still lose user-level data at scale. She emphasized that the future is in aggregated data.

Udit from Trackier added that it was 2-bit data, but now it’s 4-bit data, so more data is helpful, but you have to maintain anonymity with private data. He believes the solution is in shifting tracking from click ID to campaign ID.

Yotam from Bigabid is optimistic, noting that Apple is introducing more ways to learn about the actual value of users and that Bigabid is still improving contextual-based hard technologies. He added that once Google gets into the game, they will likely induce Apple to bring even more effective solutions, as Google is more experienced in advertising.

What solution will bring attribution, SKAd, probabilistic data, and incrementality together?

Yael from AppsFlyer explained that marketers have been moving from a unified reality to many siloed solutions across different data attributions. She said that advertisers could combine all these realities into one, so one user is one user under one dashboard, with AppsFlyer’s new release. She added that they see increased CPI and total attribution, as the future is in combining them all.

Yotam from Bigabid noted that it depends on which MMP, that Appsflyer has one solution, but others may be using a different one, so it still can be a challenge. He added that the good news is everyone is testing more and diving into more creative solutions, so things are only getting better. He emphasized that developing trust and transparency with more openness for sharing results is the way forward.

What about incrementality? What drives the needle? How can you avoid cannibalism?

Isabel from Replai said that we are starting to use a tag approach instead of a file-based approach, and that it’s best to pair tags because it helps to understand the “why”. She added that now we can move this information into real market insights by applying AI or computer vision helping advertisers keep better track of their audience via creative strategies that tell us what audience gives the best value.

Isabel from Replai said that Google has been more conservative and collaborative so Sandbox should be more advertising friendly. She emphasized that no matter what happens if your solutions are upper funnel and contextual, you are on the right path.

Yael from AppsFlyer noted that campaign measurement capabilities are still there. She said that Google’s solution is much better, as they are all about everyone working together in the industry. She said that now will have real-time data and campaign breakdowns. She added that it would also be improved because, unlike Apple, Google doesn’t take attribution into their own hands, they work with us.

Yotam from Bigabid agreed that we need to stay calm, and that there is no need for drama. He emphasized that more testing is the way and Sandbox is a good solution for that. He said that contextual is likely at least half the way. He noted that people are going to keep buying phones and using apps, so we need to be optimistic.

A member from the crowd asked the final question –

Since A/B testing was easier before iOS 14, how should we A/B test now?

Isabel from Replai emphasized that you need to rely on AI and make sure you separate campaigns.

Yotam from Bigabid agreed that you need to separate campaigns and be patient. He added that you should separate campaign levels according to creatives. He noted that Bigabid also uses a model called Deep Categories that looks at the publisher categories and separates them more precisely to narrow down audiences and increase LTV, as will have more affinity for your application.